Due to overwhelming demand (well, at least 1 person :-)), I've put up my initial code for exploring the Photoshop Elements database. For a small bit of background info, see my previous post.

I thought I'd give google code a try for hosting - as such, the project is located here.

Drop me a line in the comments if you're interested in participating.
Posted by Evan at 4:17 PM No comments: Links to this post

This is a post on usability - in the "real world" - which may become something of a series.

The subject today is a ticket vending machine - not super exciting, but it's a a new model being rolled out in south east Queensland, so could be considered topical. 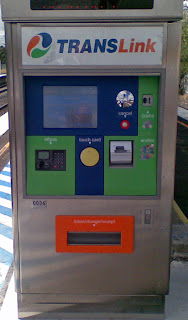 Mmmm, what ever could be a problem with this shiny new design.

Then there's the interaction flow. The series of screens you have to wade through to get a ticket is just plain cumbersome. Some issues are:

I realise that these concerns will not be as prevalent once the smartcard side of things is operational (since most commuters will just use them to top up the value on their cards) - but they will still be relevant for paper tickets.

A little bit of research shows that these machines aren't a one off design for Translink - they're a customized version of an existing design which goes by the name of "Universal Vendor 1000". I wonder how much usability testing they did?
Posted by Evan at 3:40 PM No comments: Links to this post

Well, I thought my migration to Adobe Photoshop Elements Version 6 was complete - and I was very happy with the way things had gone.

Until, I needed to print one of my pre-migration dated images.

I was greeted the following, rather unfriendly dialog, and could not print.

Wtf? I was concerned to say the least.

I re-traced some of my steps ...
I smelled a rat with the migration process for edited images. The edited images had seemed to be imported as version sets correctly. I did a bit more checking. The following grab shows a typical (albeit) sample image:

Note that the original image in the Version set is selected, and the Size attributes are displayed correctly in the Properties window.

Now, have a look at this next one, with the newer image from the Version set selected:

I've highlighted the problem area - the image width and height are missing. This was pointing to all not being well with the edited image.

I waded through the information on the Adobe support site here, I couldn't find any exact match. I even resorted to the forums, which are extremely painful to use - and still no match.

So, I thought - there's nothing for it but to submit a bug report. This itself was fairly painless, but disappointing:
However, I was determined not to be beaten by this. I went back to the support documents, and found that a number of suggested fixes finished with the recommendation to use the "Update Thumbnail" command. What the? I didn't think that this would be appropriate for me - since my thumbnails looked fine, thank you very much.

Well, I thought - what could possibly go wrong ?

I'm pleased to report that - it actually fixed the problem!! Woo hoo. I was a little surprised, but relieved to say the least. A few years of editing had not been lost.

I was wondering why I needed to do this though - I used the supported Catalog conversion process. If PSE needed my thumbnails to be updated, I would have preferred them to be done as part of the migration process.

However, this exercise did open my eyes to the strange support mechanisms provided by Adobe. When the product itself sports a gleaming new interface, it's a little sad that the support facilities are somewhat lacking - and in case of those forums, downright primitive.

If any Adobe guys are around - I guess you can close my bug report too :-)
Posted by Evan at 2:15 PM No comments: Links to this post

I forgot to mention one of the little tricks required to make the cheat sheet actually usable - you need to be able to signal it's completion :-)

There are a few things required to make this happen:

Posted by Evan at 12:04 PM No comments: Links to this post

I've been looking at the Eclipse Cheat Sheet capability recently - with a view to using it more as a workflow assistance tool, rather than a "follow these instructions" helper.
As such, the idea of crafting specific tasks that the user can interact with seems an appealing idea.
Here's a screen shot of a simple first attempt.


Note that I've used the Eclipse Forms controls to blend in with the "flat look" layout.
This was pretty easy to get going:

And that's it! Simple really.
Next, I'll take a look at how you can use task variables to communicate between your tasks.
Posted by Evan at 4:06 PM No comments: Links to this post