Following on my theme of repair, rather than throw away and replace ... my attention turned to my door chime - which had not been working properly for a while.

It's a simple model - an Arlec DC371 - $35 retail. After changing batteries in the receiver and transmitter, it was still not cooperating. But, in looking around inside the transmitter, I inadvertently pushed the button to select the tunes - and it sprang in to life.

So, I knew we had some basic functionality. I returned to the circuit board, and inspected the main micro-switch for the pushbutton. It had two leads protruding from the other side of the circuit board - so I shorted the switch output with a screw driver, and hey presto - it worked.

The cuplrit was the micro-switch. And they don't call them micro for nothing. 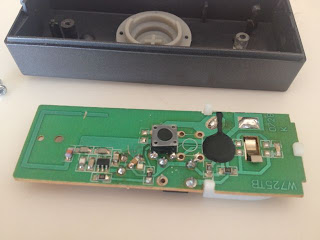 It looked a little daunting. The top plastic retainer was fixed by 4 little plastic lugs. I sliced those off, and underneath was a small plastic button, sitting on top of a flexible metal disc - which was slightly convex, so that it clicked when depressed. 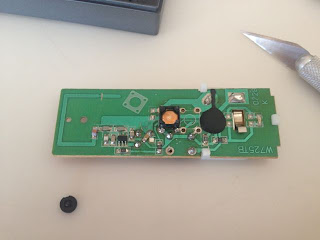 Under the disc were 3 contacts - two at the sides, and one in the middle. When the disc was pressed, it closed the circuit between these contacts. I removed the disc, and tried shorting the contacts with a screw driver but this didn't seem to work.

I gave the contacts and the disc a good scrape with a sharp knife, and a clean with some vinegar. And this seemed to be enough to allow the contacts to work. Result.

The tricky part was re-assembling the switch, since I'd cut off the tops of the lugs. I turned to my trusty super glue - but the first attempt failed - since it seemed to find it's way in to the mechanism.

I broke it down again, cleaned the parts, and tried again. This time was successful.

So, it's now back in operation. No more complaints from family and friends that the door bell isn't working.

I know I could have bought a new one ... but it's the principle, right?

I certainly enjoyed the way you explore your experience and knowledge about the subject..Its been very useful ..
pcb manufacture

Door chimes is the best protective factor. I want to take some design of that with specific features so please suggest me. If you want to take the tips over door chimes then go through that for your protection.